Mulan: Honour or dishonour on your cow? 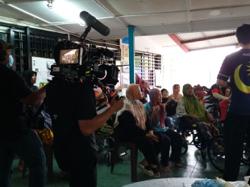 This image released by Disney shows Yifei Liu in the title role of "Mulan." (Jasin Boland/Disney via AP)

Be careful. People like to be told what they already know. Remember that. They get uncomfortable when you tell them new things. New things... well, new things aren’t what they expect. They like to know that, say, a dog will bite a man. That is what dogs do. They don’t want to know that man bites a dog, because the world is not supposed to happen like that. In short, what people think they want is news, but what they really crave is olds... not news but olds, telling people that what they think they already know is true. – ‘The Truth’, Terry Pratchett

IN the time I’ve gone from kid to adult, it feels like the proportion of adapted or remade material to original material has been steadily rising.

One big wave was probably the beginning of the Marvel Cinematic Universe. Since then, it feels like more and more movies are adapted from other source material, or are remakes of movies already made countless times.

We had the Batman movies which featured the Michael Keaton, Val Kilmer, George Clooney set; the more memorable Christian Bale set; the Ben Affleck set, and for some inexplicable reason, we will soon be getting Robert Pattinson.

Same character, various interpretations, and the public never seems to get bored. These are all huge budget productions, which means that someone has done the math and determined that these movies will all sell.

I suppose the Disney live action remakes all fall into the category of confirmed money makers.

No matter how good or bad, no matter how controversial, any remake of a Disney classic is apparently guaranteed to make money. Guaranteeing quality of course is a different question entirely.

It is worth noting of course that even the original Disney classics are all themselves technically adaptations of fairy tales, folk mythology, and so on.

I suppose the element of an existing consumer/ fan base for pre-established material is really too tempting an offer to pass up. Over time though, it feels like with the resulting shrinkage of space for original content, human creativity as a whole becomes shortchanged in the process.

Coming to Mulan, the three words alone “live action Mulan” would guarantee massive financial profits in any scenario except for a truly perfect storm of incompetence, mismanagement, and complete butchery of the subject material.

There’s too much money involved for any of that sort of thing to happen nowadays.

Was it a good remake though?

I suppose many seem to think so, from brief Google searches. But on my social media feeds, the response did seem rather less enthusiastic.

I think I’ll only mention in passing the controversies surrounding Liu Yifei’s apparent endorsement of the police crackdown in Hong Kong, and the relationship between the movie producers and the government of Xinjiang with all its attendant Uighyur controversies. (These are worth Googling though, for those interested).

I thought I would share a few personal views on artistic intent, narrative structure, and emotional resonance (very minor spoilers ahead).

The gender aspects of the legend of Mulan appears to have maintained an astonishing relevance over 15 or more centuries. Gender discrimination over that time has certainly evolved, but has indubitably – and tragically – persisted to the present day.

The way we talk about gender and about discrimination, and how this discourse has influenced art, has also evolved a lot – even within our own lifetimes.

In this regard, I often think of the movie The Last Jedi, which represented another trend, the resurrection of old franchises (the route taken by both Star Wars and Star Trek – between which my wife likes to insist there is no difference).

I interpreted The Last Jedi as having a lot of commentary on toxic masculinity. I think that’s a subject that certainly deserves attention, and something we should all be increasingly aware of.

The way it was done as a whole in The Last Jedi though, felt ever so slightly on the nose.

When done well, the moral of a story and the narrative power of a story align to resonate ever so perfectly with the audience.

When it is off balance however, one aspect may overshadow the other, or result in a somewhat mangled integration.

I feel that may have been a little of what happened in 2020’s Mulan.

The credits list no less than four writers of the screenplay. This in and of itself of course is not a determinant either way, but for me, the movie did have a feel of having too many chefs, and trying to pull in too many directions simultaneously.

Much like The Last Jedi, the end result feels a bit like a hodgepodge, a collage of pieces that do not always fit well, rather than a well-structured story where the narrative intent shines through clearly from start to end.

There were, of course, some bright spots.

Some of the kungfu was fun – especially the early spear fight at the camp – but of course, this was no Crouching Tiger, Hidden Dragon (indeed, one wonders how a young Zhang Ziyi would have done as a Mulan).

An emphasis on values (loyal, brave, and true) is always nice. They tried to show Mulan’s pre-battle fears and subsequent courage, but it seemed to fall a little flat. One did not really get a sense she was truly overcoming big fears, or ever felt our heroine was ever in any real danger.

There didn’t seem to be much exposition on why distant villagers would feel so much loyalty to the emperor. One hopes it is not an encouragement of blind loyalty.

The true part wasn’t too bad.

This remake seemed to aspire to greater historical accuracy, and of course had a few great nods to the Disney version, as well as a few other enjoyable Easter eggs.

Ming-Na Wen, who voiced the original Disney Mulan, makes a nice cameo (her daughter is in the same scene), and they retained the memorable “it doesn’t matter what she looks like, only what she cooks like” line.

In the scene where Mulan bathes, there is a magnolia tree in the foreground; ‘Mulan’ literally means magnolia (thanks again to my wife for pointing that one out).

There is a scene where the Phoenix spreads its wings behind Mulan, which to me seemed a little too much of a rip-off from a similar scene with Daenerys near the end of Game of Thrones.

Perhaps my favourite Easter egg though is an early scene in the movie, where Mulan is chasing rabbits and comes back to comment to her family about how she could not tell male and female rabbits apart.

Wikipedia showed me that this is a reference to some of the earliest poems or ballads recorded about Mulan, which ends with a quote by Mulan: "The male hare has heavy front paws. The female hare tends to squint. But when they are running side-by-side close to the ground, who can tell me which is male or female?"

On the whole though, the movie for me seemed to fall a little short on creating significant emotional resonance or being a memorable, moving story. It seemed to jump a little from one thread to another, without capturing the essence that stole our hearts in the original animated version.

To the writers and directors, dishonour on your cow!!

NATHANIEL TAN did not recognise Jet Li at all. He is a strategic communications consultant who can be reached at nat@engage.my.