LUSAIL, Qatar, Nov. 24 (Xinhua) -- Richarlison scored a second-half brace as Brazil began their quest for a sixth World Cup title with a 2-0 victory over Serbia in their Group G match here on Thursday.

The Tottenham forward put the South American giants ahead with a close-range strike and he doubled the lead by volleying home with a spectacular bicycle kick.

Richarlison has now scored nine times in his last seven games for Brazil, with his overall international tally standing at 19 goals in 39 appearances. 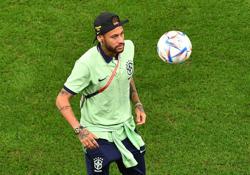