FILE PHOTO: A view shows the Zaporizhzhia Nuclear Power Plant in the course of Ukraine-Russia conflict outside the Russian-controlled city of Enerhodar in the Zaporizhzhia region, Ukraine August 4, 2022. REUTERS/Alexander Ermochenko//File Photo

Energoatom said the plant's area was struck five times, including near the site where radioactive materials are stored, but that nobody was injured and the situation at the plant remained under control.

Earlier in the day, the Russian state-owned news agency TASS said Ukraine shelled the plant for a second time on Thursday, citing the Russian-installed local administration. Reuters could not independently verify the reports of either side. 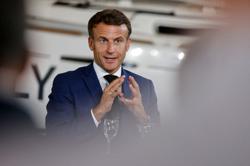