BENI, Democratic Republic of Congo (Reuters) - Hundreds of prison inmates in the eastern Congolese city of Butembo have escaped after the facility was attacked by an armed group overnight, local authorities said on Tuesday.

Two police officers were killed and part of the prison was damaged by a fire during the attack by Mai-Mai militiamen, said Antony Mwalushayi, a spokesperson for the army's operations against armed groups in Democratic Republic of Congo's North Kivu province.

He did not say how many prisoners had escaped, but Butembo Mayor Mowa Baeki-Telly said it was in the hundreds and appealed to residents to help round them up.

"If there is an escapee, he should not be burned - do not kill him ... bring him here to us so that we can put him back in prison," he told reporters.

Mai-Mai comprises several armed groups which originally banded together to resist two invasions by Rwandan forces in the late 1990s. They have since morphed into a variety of ethnic-based militia, including hardline secessionists.

Escapes are common from Congo's overcrowded and poorly secured prisons. In 2020, armed men freed more than 1,300 prisoners in the eastern city of Beni. 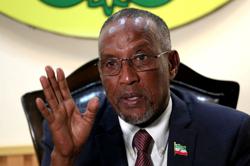