By JAMES VERTUNO and HEATHER HOLLINGSWORTH 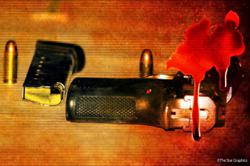 A priest comforts people as they react outside the Ssgt Willie de Leon Civic Center, where students had been transported from Robb Elementary School after a shooting, in Uvalde, Texas, U.S. May 24, 2022. - REUTERS/Marco Bello

UVALDE, Texas: Relatives turned to social media and waited in a desperate attempt to find their missing children as the death toll in a gruesome school shooting at a Texas elementary school rose to at least 19 students. Authorities said the gunman also killed two adults.

Adolfo Cruz, a 69-year-old air conditioning repairman, was still outside Robb Elementary School in the town of Uvalde Tuesday night as the sun set, waiting for word on his 10-year-old great-granddaughter, Elijah Cruz Torres, whose whereabouts remained unknown to family.

Cruz drove to the scene after receiving a tearful and terrifying call from his daughter shortly after the first reports that an 18-year-old gunman had opened fire. While he waited outside the school Tuesday night, his family was at the hospital and civic center waiting for any potential word on her condition.

Çruz called the waiting the heaviest moment of his life.

"I hope she is alive,” Cruz said. "They are waiting for an update.”

"It’s a shock for me. I also feel for all the other families. This is a small community. Uvalde has always been real friendly. People are real friendly,” Cruz said.

On social media, pictures of smiling children were posted, their families begging for information. Classes were winding down for the year and each school day had a theme. Tuesday's was Footloose and Fancy. Students were supposed to wear a nice outfit with fun or fancy shoes.

By nightfall, names of those killed during the attack were beginning to emerge. Fourth-grade teacher Eva Mireles was remembered as a loving mother and wife.

"She was adventurous. I would definitely say those wonderful things about her. She is definitely going to be very missed,” said 44-year-old relative Amber Ybarra, of San Antonio.

Ybarra was preparing to give blood for the wounded and was pondering how no one was able to spot possible problems in the shooter in time to stop him.

"To me, it’s more about raising mental health awareness," said Ybarra, a wellness coach who attended the elementary school where the shooting happened. "Someone could possibly have seen a dramatic change before something like this happened."

Hillcrest Memorial Funeral Home, which is located across the street from Robb Elementary School, said in a Facebook post on Tuesday evening that it would be assisting families of the shooting victims with no cost for funerals. - AP