JAKARTA (Reuters) - Indonesia summoned Britain's ambassador on Monday to explain the raising of a lesbian, gay, bisexual and transgender (LGBT) flag at its embassy, and urged foreign missions to respect local "sensitivities" following a backlash among conservatives.

Barring the sharia-ruled province of Aceh, homosexuality is not illegal in Indonesia, the world's largest Muslim-majority country, although it is generally considered taboo. 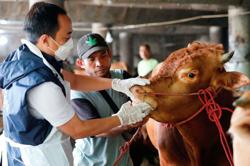