CAIRO (Reuters) - Sudan's main opposition coalition called on Monday for civil disobedience and protests across the country after the military dissolved the transitional government, the information ministry said.

The Forces of Freedom and Change alliance demanded that the transitional military council step down and transfer power back to the civilian government.

It also called for the release of all detained members of cabinet and the sovereign council, a ruling body that had shared power between the military and civilians until it was dissolved by General Abdel Fattah al-Burhan on Monday, the ministry said on Facebook. 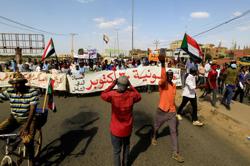