By Michelle Nichols and Valerie Volcovici

UNITED NATIONS (Reuters) - With less than six weeks to go before world leaders convene for a major climate summit in Glasgow, U.N. Secretary-General António Guterres and UK Prime Minister Boris Johnson will hold a roundtable of world leaders on Monday to address major gaps on emissions targets and climate finance.

The closed-door meeting on the sidelines of the annual high-level week of the U.N. General Assembly will include leaders from a few dozen countries representing industrialized nations, emerging economies and vulnerable developing countries, said Selwin Hart, assistant secretary-general and special adviser to Guterres on climate action.

"The alarm bell needs to be rung," he told reporters last week. "Countries are not on target, really, to bridge these gaps in mitigation, finance and adaptation."

The roundtable discussion aims to ensure a successful outcome at the U.N. climate conference being held from Oct. 31 to Nov. 12 in Glasgow, even as recent reports show major economies being far off track on their emission reduction goals and climate finance commitments.

As of Friday, between 35 and 40 countries have said they would participate but Hart declined to name them.

A U.N. analysis of country pledges https://www.reuters.com/business/environment/countries-emissions-pledges-still-fall-short-global-climate-goals-un-says-2021-09-17/?taid=6144e5d3a5c42200013c48c3&utm_campaign=trueanthem&utm_medium=trueanthem&utm_source=twitter under the Paris climate agreement released on Friday said that under current national pledges, global emissions would be 16% higher in 2030 than they were in 2010 - far off the 45% reduction by 2030 that scientists say is needed to stave off disastrous climate change.

Another report released on Friday by the Organisation for Economic Co-operation and Development said that rich countries likely missed a goal to contribute $100 billion https://www.reuters.com/article/businessNews/idUSKBN2GD0WZ last year to helping developing nations deal with climate change after increasing funding by less than 2% in 2019.

The U.N. expects to hear updates from some of the major economies on how they will strengthen their emission reduction targets and clarity around how to hit the $100 billion goal.

Guterres will also press donor countries and multilateral development banks to show progress toward meeting his goal to increase the share of finance dedicated to helping countries adapt to climate change to 50% from the current level of 21%, said Hart.

Johnson, host of the COP26, said at a meeting of the major economies on Friday that the world's richest countries "must get serious about filling the $100 billion pot that the developing world needs in order to do its bit."

Guterres told Reuters last week that the upcoming climate summit is at risk of failure.

"I believe that we are at risk of not having a success in COP26," Guterres told Reuters in an interview at U.N. headquarters in New York on Wednesday. "There is still a level of mistrust, between north and south, developed and developing countries, that needs to be overcome."

(Reporting by Michelle Nichols at the United Nations and Valerie Volcovici in Washington; Editing by Mary Milliken and Daniel Wallis) 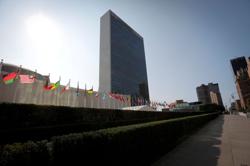