Russia is holding the elections on Sept. 17-19 and for the first time, United Russia, the ruling party that supports President Vladimir Putin, is campaigning in eastern Ukraine on territory controlled by Moscow-backed separatists.

"We are confident that the Russian Federation has no right to hold elections in these territories," Oleksiy Danilov, the secretary of Ukraine's security and defence council, told a televised briefing.

"All participants in this process... members of election commissions, agitators, candidates, all observers who are officials in these elections will be under the sanctions of our country," he said.

Danilov did not specify what kind of sanctions would be applied and did not give names.

Up for grabs in the elections are the votes of more than 600,000 people who were given Russian passports after a Kremlin policy change in 2019 that Ukraine decried as a step towards annexation.

More than 14,000 people have died in fighting between separatists and Ukrainian forces, with deadly clashes continuing regularly despite a ceasefire that ended large scale combat in 2015. 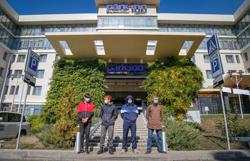