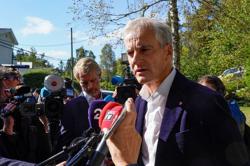 UTOEYA, Norway (Reuters) - Norway will next week mark the tenth anniversary of the killing of 77 people by anti-immigrant extremist Anders Behring Breivik in the worst act of violence in the Nordic country since World War Two.

Breivik detonated a car bomb outside the prime minister's office in Oslo, killing eight, before driving to Utoeya island and shooting 69 people gathered at a Labour Party youth camp on July 22, 2011.

A ceremony will take place in Oslo on Thursday outside what was once the prime minister's office - an empty shell since the attack due to disagreements over how to rebuild it - attended by Prime Minister Erna Solberg, survivors and relatives of the victims.

Later, a ceremony on Utoeya island will honour the 69 victims of Breivik's shooting spree.

"I am always thinking about how young they were," said shooting survivor Astrid Hoem, 26, during a recent visit to the island.

The island has become a memorial and educational centre, with visiting school children able to spend the night in one of the wooden cabins built since the attack.

A glass and wood structure has been erected around what was once the island's cafe, where several victims were killed.

The structure has 69 pillars for the 69 victims of the shooting and is surrounded by a barrier of 560 wooden beams, representing the survivors' protective memory of the dead.

Debate over the attacks has shifted over the past decade. Survivors, many of them teenagers at the time, are determined to confront the far-right ideology that was a catalyst for the killings.

They are concerned by how Anders Behring Breivik has become an inspirational figure for white supremacists worldwide.

In New Zealand in March 2019, Brenton Tarrant, who said in his manifesto he was inspired by Breivik, gunned down 51 people at two mosques.

Breivik is serving a 21-year sentence, which can be prolonged indefinitely if he is deemed a threat to society. 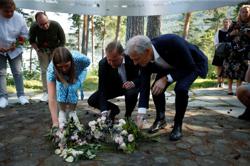