Albanians vote for new government with graft on their mind 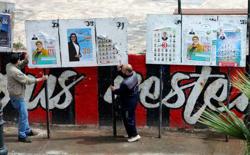 A voter checks a name list during the parliamentary elections in Tirana, Albania April 25, 2021. REUTERS/Florion Goga

TIRANA (Reuters) -Albania held a parliamentary election on Sunday likely to be a neck-and-neck contest between the ruling Socialists and the opposition as corruption weighs heavily on voters in one of Europe's poorest nations.

"I want to see changes in all the sectors. I want Albania to move towards European Union," said Edmond Katanxhaj, 64, voting at a polling station in Tirana.

Tirana was granted European Union candidate status in 2014, but there has been little progress due to enlargement fatigue around the bloc and lack of reforms within Albania.

With a population of 2.8 million, but 3.6 million voters due to its large diaspora, Albania has a history of violence and fraud allegations during elections in the three decades since the end of communism.

On Wednesday, a PS supporter was killed and four people injured during a shootout following a dispute between Socialist and Democrats supporters.

The State Election Commission said that as of noon, turnout was 27%, and no incidents had been reported.

Voters are eager for an end to widespread corruption. Albania ranks 104th in Transparency International's 180-nation list for 2020 and is accused by the United States of being a major source for marijuana production and other drug shipments.

Rama, a 56-year-old painter and former basketball player, has been in power for eight years.

"Today is the day that we don’t have any negative feelings against anyone that with his or her vote will express another opinion," he said after voting on Sunday.

Basha, a 46-year-old lawyer and former mayor of Tirana, has held previous government posts and spent time living in the Netherlands. He urged people to vote to "decide for the future of your families, your country and yourselves".

Orestia Nano, an artist, said her main motive to vote was to end corruption.

"When I entered the University of Arts there were people of my age who paid money to get into the school. There are people who have to pay money to get health treatments (in state hospitals)," she said.

"It (corruption) is pretty bad in really high levels.”

The new government will have to deal with the coronavirus pandemic and rebuilding homes after a 2019 earthquake that killed 51 people and damaged more than 11,400 residences.

Twelve political parties are taking part to elect the 140-seat parliament, with opinion polls showing the PS and PD running close to be the party with most votes. The PD is heading an opposition coalition.

(Reporting by Fatos Bytyci;Writing by Ivana Sekularac;Editing by Andrew Cawthorne and Frances Kerry)