The program will reach 185,000 children in the crisis-stricken country this year, and aims to expand to some 1.5 million by the end of the 2022-2023 school year, the WFP said in a statement. Child malnutrition https://www.reuters.com/investigates/special-report/venezuela-malnutrition has increased in Venezuela as the once-prosperous country's economy collapsed.

Humanitarian aid groups have long pushed for Maduro's government to allow the WFP to distribute food aid in Venezuela. The political opposition has accused Maduro's government, which it labels a dictatorship, of conditioning state food assistance on political loyalty, a claim Maduro denies.

"We believe the school is the most appropriate platform for WFP to reach communities in an independent manner," the WFP's release quoted Beasley as saying.

The South American country's foreign ministry said in a statement posted to its website that the meeting between officials and the WFP would "lead to the evaluation of food security in Venezuela, with the objective of estimating the needs and vulnerabilities of Venezuelan households."

(Reporting by Luc Cohen in Caracas; Editing by Leslie Adler and Karishma Singh) 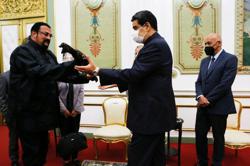