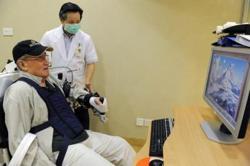 BERLIN, Oct. 19 (Xinhua) -- Germany's Minister for Economic Affairs and Energy Peter Altmaier expressed his support for a strong partnership with the Asia-Pacific region, as the Asia Pacific Conference of German Business (APK) was held online Monday.

"The COVID-19 pandemic has hit both our economy and the economies in the Asia-Pacific region very hard," said Altmaier in a statement. "For me, one thing has always been clear: going forward, we will need more and closer cooperation because crises can only be resolved in a collective effort, not unilaterally."

The conference is organized by the Asia-Pacific Committee of German Business (APA), the German Chambers of Commerce Abroad (AHK) in Asia-Pacific, and Germany's Ministry for Economic Affairs (BMWi). Because of the COVID-19 pandemic, this year's APK took place in a digital format for the first time.

Kaeser noted that the latest economic figures showed that China had come out of the COVID-19 pandemic quickly, the German Press Agency (dpa) reported.

According to data by the National Bureau of Statistics (NBS) published on Monday, China's gross domestic product (GDP) grew 4.9 percent year-on-year in the third quarter, faster than the 3.2-percent growth already observed in the second quarter.

In a video message, Chancellor Angela Merkel stressed that she saw great potential in economic relations with Asian countries, according to dpa.