Father and son doctors who treated patients die from Covid-19

FLORIDA (ANN): Two doctors from two generations within a family, who both dedicated their lives to healing and saving patients, unfortunately succumbed to the deadly novel coronavirus disease in Florida, United States.

Dr. Jorge Vallejo was a retired obstetrician and gynecologist. He died at the age of 89 on June 27, as per the Miami Herald last Tuesday, Aug. 11. Meanwhile, his 57-year-old son, Dr. Carlos Francisco Vallejo, was a board director at Palmetto General Hospital who took care of Covid-19 patients. He passed on Aug. 1 after spending 42 days in the intensive care unit.

According to Carlos’s wife, Lissette, her husband lived near Jorge and would frequently visit and take care of his father. Her husband led medical teams at various nursing homes in South Florida. Before he fell sick, Carlos was caring for about 76 Covid-19 patients.

Aside from the father and son, Lissette was also infected. Their relatives believe that Carlos might have contracted the virus from one of his patients, as per report. Jorge was hospitalized on Father’s Day last June; six days later, he lost his battle against the disease.

The Vallejos are originally from Cuba before they migrated to the U.S. The retired obstetrician and his wife Gisela had three children: Jorge, a psychiatrist, Carlos, an internist and Freddy who became a dentist.

Carlos’s children said their father took all the precautionary measures so that he could continue taking care of his patients, as they battled Covid-19 at hospitals and in rehabilitation centers.

The Vallejo family is a family made up of a lot of doctors, as per CBS-owned WFOR on Aug 6. The clan has 20 doctors, dentists and medical students.

“I think my family is the perfect example of what doctors should be, ” Carlos’s niece and CBS4 reporter Jessica Vallejo was quoted as saying. “My family has always been doctors who dedicate their lives to their patients.”

The reporter also emphasized how every life that has been lost to the health crisis matters.

“It’s not just statistics, it’s a life, it affects a family, ” she said in the report. “So when I’m reporting I remember that because it feels like my family is broken.” – Philippine Daily Inquirer/Asia News Network 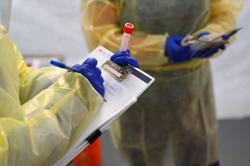