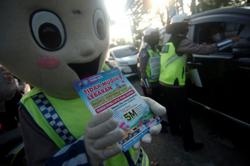 Heavy machines level the soil for the construction of Kediri Airport in Bulusari village at the foot of Mt. Wilis, Kediri regency, East Java, on Jan 24. - JP

JAKARTA (The Jakarta Post/ANN): In the midst of the Covid-19 outbreak, the government has officially begun the construction of Kediri Airport in Kediri regency, East Java, which is expected to be completed in two years to help close the economic gap in the province.

Coordinating Minister of Maritime Affairs and Investment Luhut Binsar Padjaitan officiated the groundbreaking of the airport on Wednesday in a virtual ceremony broadcast by video.

East Java Governor Khofifah Indar Parawansa, who attended the ceremony, expressed her gratitude for the start of construction, saying that the airport would help bridge the economic gap between the province’s northern and southern regions.

"During the Covid-19 emergency, the construction can commence as scheduled," Khofifah told reporters on Wednesday after attending the virtual groundbreaking ceremony.

Khofifah said that the airport had been enlisted in the government list of prioritized projects under the National Strategic Projects (PSN).

Khofifah added that the airport would be in line with the East Java administration's priority to build an integrated economic hub, called Selingkar Wilis, involving regencies located around Mount Wilis in western part of the province.

The airport itself is located on the foot of Mount Wilis on the northeastern side, some 20 kilometres west of Kediri City.

Gudang Garam, through its subsidiary Surya Dhoho Investama, is set to spend around Rp10 trillion (US$732.4 million) to build the airport, including the acquisition of about 400ha of land.

The airport, the construction of which is being fully funded by the company, is expected to be bigger than Abdul Rachman Saleh Airport in Malang and accommodate about 5 million passengers per year.

Once completed, it will have a 3,000m by 45m runway that will be able to accommodate a wide range of aircraft, from Boeing B777s to Airbus A350s, as well as a passenger terminal, cargo terminal and parking area.

It is expected to reduce the overburdened Juanda International Airport in Surabaya, the capital of East Java, about a two-hour drive from Kediri.

The airport’s groundbreaking has faced several delays, in part as a result of problems with land acquisition. Some residents are still refusing to release their land over unmet compensation. There are fewer than 20 families with about two hectares of land in the villages of Bedrek and Bulusari who remain in the area.

"If we accept the price, we won't be able to buy land and build a house of similar value to what we have now," Yana, one of villagers, told The Jakarta Post on Thursday.

She asserted that none of the villagers wanted to hamper the airport’s development, they simply wanted fair compensation.

The Kediri administration said that only 0.6 percent of the land to build the airport remained unacquired.

Gudang Garam Director Istata Aswin Siddharta said in a recent statement that Kediri airport had been prepared as an international airport with a focus on serving hajj and umrah (minor hajj) pilgrims as well as thousands of migrant workers from the southwestern part of East Java.

The airport will be able to accommodate large planes for domestic and international flights. - The Jakarta Post/Asia News Network