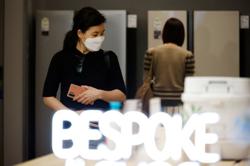 A person wearing a protective mask walking past a shuttered store at a shopping mall in the Jongno district of Seoul, South Korea, on Feb. 24, 2020. - Bloomberg

SEOUL (The Korea Herald/ANN): South Korea’s major industries -- including electronics, automobiles, retail and oil refining -- are on high alert due to a surge in Covid-19 cases here, as well as the market slowdown in China, the nation’s biggest export destination.

As of Monday, the number of confirmed Covid-19 patients stood at 833, up 161 from the previous day, and the death toll had risen to seven.

The nation’s largest tech firm, Samsung Electronics, temporarily shut down its operations at its Gumi plants on Saturday after one of its employees was confirmed to be infected.

Another chipmaker, SK hynix, imposed self-isolation on about 800 employees at its Icheon campus Friday as a precaution after one of its recruits was found to have been in close contact with a Covid-19 patient.

The same day, Hyundai Steel shut down part of its Pohang plant after an employee was confirmed to have Covid-19. The company disinfected the entire plant and ordered all the employees to self-isolate.

LG Electronics also confirmed Monday that it had closed down its research centre in Incheon from Saturday to Monday because an employee’s child was confirmed to be infected. The firm shut down its research lab and asked hundreds of employees to work at home.

Additionally, the virus is a cause of concern for the tech firms due to a slowdown in demand for smartphone chips in China, the world’s largest market and production base for mobile phones, according to a recent report released by the Export-Import Bank of Korea.

Global demand for smartphones is predicted to decline by about 10 per cent year-on-year due to the contraction of the Chinese market, the report said.

The nation’s largest automaker, Hyundai Motor, is also on alert due to parts supply disruptions in China and the recent death of an employee of one of its suppliers in Gyeongju, near its Ulsan plant.

It restricted outsiders from entering its headquarters in Seoul on Monday due to concerns over the spread of Covid-19. It also suspended interviews for new recruits.

The retail industry has been hit the hardest. Large retailers, including department stores, supermarkets, outlets and duty-free shops, have faced temporary shutdowns after visits by Covid-19 patients.

They include Lotte Department Store, Shinsegae Department Store, E-mart, Homeplus, Shilla Duty Free and Lotte Duty Free. The retailers are estimated to have lost more than 200 billion won (US$164 million) in sales due to the shutdown over the past month.

The oil industry’s first quarter earnings are also being revised downward. According to financial information company Infomax, the stock market lowered its first quarter operating profit forecasts for S-Oil by 81 per cent from a month earlier and for SK Innovation by 69 per cent.

The government is making efforts to assist small and midsized companies affected by the virus.

Vice Finance Minister Kim Yong-beom said Monday that the government was reviewing all its policies so as to minimize the impact on the economy, having raised its alert level to “serious.” The Trade Ministry, the Korea Trade-Investment Promotion Agency and related agencies are jointly operating a support system for companies suffering as a result of stoppages at plants in China.

Also on Monday, Fair Trade Commission Chairperson Joh Sung-wook visited the production site of an electronic parts manufacturer based in Gyeonggi Province. She met with representatives of large and medium-sized companies and related organizations. The meeting was also attended by executives from LG Electronics and related suppliers.

At the meeting, LG Electronics said it would expand assistance for partner companies dealing with fallout from the virus, including consultations and interest-free loans for companies returning from overseas.

Joh, during the event, said, “We will continue to look into whether delivery problems occur due to the virus and make sure the burden is not transferred unfairly to subcontractors.”

She urged large companies to pay attention to their suppliers’ difficulties.

“The difficulties of suppliers eventually lead to the deterioration of the competitiveness of large companies. Symbiosis and co-prosperity with suppliers are essential.” - The Korea Herald/Asia News Network 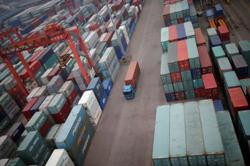