A Malaysia Airlines hostess wearing a protective face mask checking the temperature of a passenger at the KL International Airport in Sepang. A report published on Tuesday (Feb 18) listed Malaysians as the biggest per capita users of plastic packaging in a region responsible for more than half the plastic litter in the world's oceans. - AFP

KUALA LUMPUR: A report published on Tuesday (Feb 18) listed Malaysians as the biggest per capita users of plastic packaging in a region responsible for more than half the plastic litter in the world's oceans.

The report by the World Wide Fund For Nature (WWF) covers China, Indonesia, Malaysia, the Philippines, Thailand and Vietnam, which together account for "around 60% of plastic debris entering the ocean."

The average Malaysian uses 16.78kg of plastic packaging each year, according to WWF estimates, with Thailand next at 15.52kg per person per annum.

"Rapid economic growth has led to an immense increase in the use of plastic, especially for packaging consumer goods," the WWF stated, linking plastic use with rising affluence across the region.

Gross domestic product per capita in Malaysia comfortably exceeds levels in the five other countries, hitting US$11,373 per person in 2018, according to World Bank data.

The WWF report comes after Malaysia's Minister of Energy, Science, Technology, Environment and Climate Yeo Bee Yin said on Jan 20 that "we do not want to be the garbage bin of the world," announcing that her country had returned almost 4,000 tons of unrecyclable plastic rubbish to countries that had shipped it to Malaysia during recent years.

The minister's press office has not commented on the WWF report so far.

Indonesia and the Philippines have also complained about the growing trade in rubbish from Europe, North America and East Asia, saying that much of what is sent is unrecyclable plastic.

The trade in plastic waste for recycling largely shifted to South-East Asia after China implemented a ban on imports in 2018. The European Union exported "around 150,000 tonnes of plastic waste per month" in early 2019, according to the European Environment Agency, an EU body.

Asian plastic use lags behind levels in Europe, measured per capita, with 31 kg of plastic packaging waste produced per person per year across the European Union, according to 2018 data from Eurostat, the bloc's statistics body.

The WWF estimates that average plastic packaging consumption across the six Asian countries in its new report is 13.74 kg per person per year, meaning that in 2016, the six used 27 million tons of plastic packaging.

Eurostat estimates that the EU generates 15.8 million tons of plastic waste a year, figures put together prior to Britain's recent departure from the bloc.

Waste management in Asia has not kept pace with economic growth and increased plastic use and lags behind the EU, where "around 40 per cent" of plastic packaging waste is recycled, according to Eurostat.

Around half the rubbish generated China and Thailand is collected, but in Malaysia and the Philippines only 15 per cent is collected, according to the WWF. 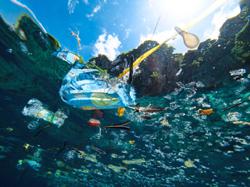