A teacher from northwest China has been banned from the classroom after a pupil recorded his frequent tirades of abuse.

The 13-year-old girl shared more than 100 separate clips with local media in which the teacher, identified only by his surname Wang, insulted and cursed at the girl.

The girl, whose name was not disclosed, told Shaanxi Television, which broadcast the footage over the weekend, that the teacher had wanted to drive her out of his class because she had been performing badly.

The girl said she had been repeatedly humiliated by Wang since she started studying at Shangdan Gaoxin School in Shangluo city’s Shangzhou district at the start of the year.

The district government later said it had launched an investigation following a public outcry. Wang was given a demerit and stripped of his teacher’s license, according to a statement on the government’s website on Sunday.

“As long as it was his class, he would insult me. He kept cursing me, six times to nine times in one class,” the teenager told the television station.

She claimed that Wang wanted to force her to quit school by verbally attacking and isolating her. “He told my classmates, if you stay with that idiot, you’ll become idiots too,” she claimed.

“I am poor at studies, but you can’t be like this, insulting me every day,” she said. 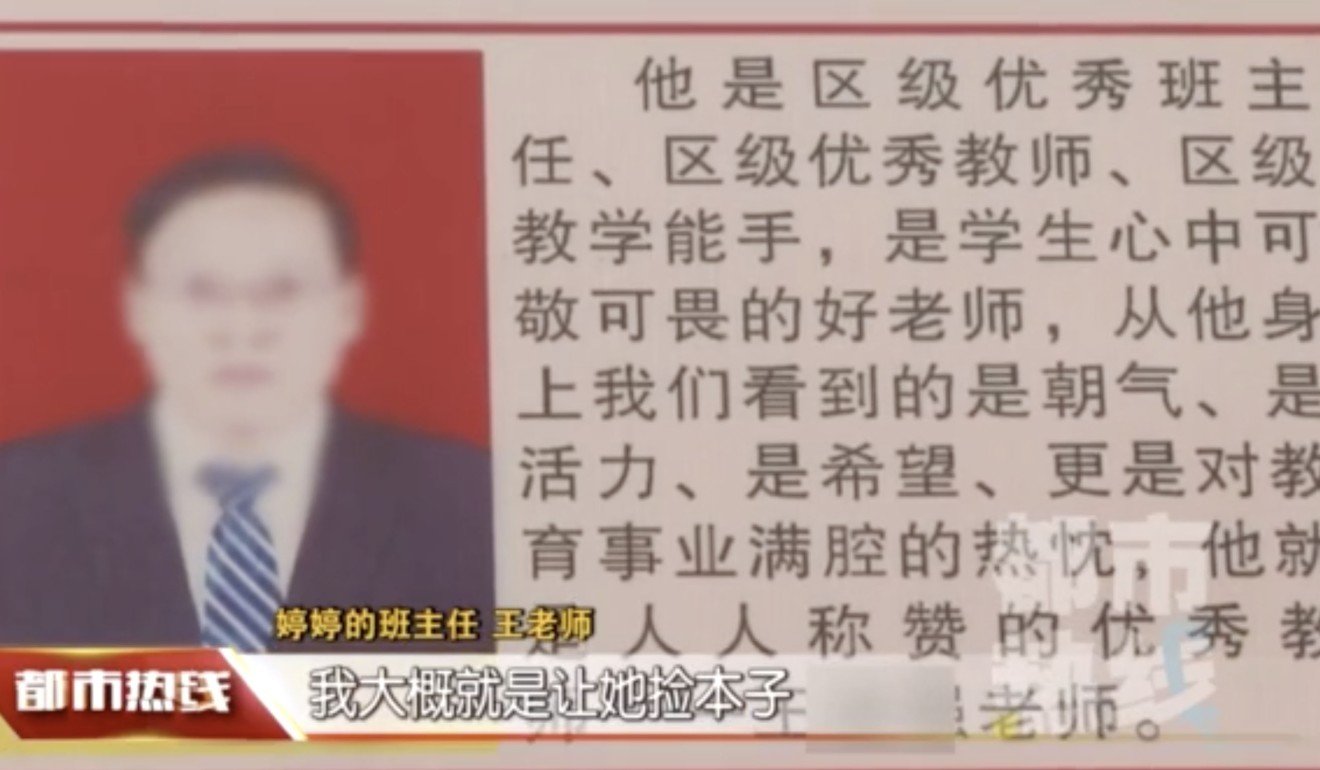 In one audio she shared, Wang told her not to attend school any more. “I’ll throw you to the ground, kill you in the classroom if you are still here next term,” he said.

“Why do you bother sitting here? You’re just like a dead person sitting in the classroom!” the man said in another clip.

In another occasion, Wang asked the entire class “who is a b**** in our class?”, and after repeating the same question, some students answered the girl’s name.

Her family talked to the teacher in April, but things did not improve, according to the programme.

The girl’s grandmother said she would not have believed the teacher would say such things until she was presented with the evidence. She told the TV station: “He does not deserve to be a teacher.”

In the programme, Wang denied insulting the girl in his classes, although he also said, “sometimes I used some improper words”.

While physical punishment is now banned in Chinese schools, verbal attacks on pupils are still commonplace and regarded as acceptable by many people.

One of Wang’s colleagues defended him, saying: “When the teacher is angry at a child, he will scold her. I think this is acceptable. He does so because he loves the child.”

A woman from the school’s political education department told the TV station: “He meant well, although he might have said something inappropriate. He meant to stimulate this child.”

In Sunday’s statement, the district government said Wang and education officials had met the girl and her family and apologised.

The girl has been given the chance to transfer to another class or school and has also been offered counselling.