Not a gangster or a nerd

Game for life: As a professional gamer, Xian is among a very small number in Singapore. - Photos by KEVIN LIM

PROFESSIONAL gamer Ho Kun Xian is staying away from carbs.

He’s chosen to have lunch at Fengshan Centre in Bedok and we’re having soupy bak chor mee with meatballs.

I’ve ordered two big bowls but the stall owner mishears me and brings us a big bowl and a regular bowl.

I get the smaller version.

Thirty minutes later, when I’ve long finished my portion, he’s still toying with his. Half the soup is gone and he’s eaten the meatballs, but the heap of noodles remains in the bowl.

You’re not hungry, I ask.

He says he’s trying to lose weight because he’s got a big tournament coming up in December.

“I have to travel 20-over hours to America and I don’t want to be lethargic.”

He explains that in the run-up to competitions, he tries to cut down on carbohydrates and to exercise more so that he’s mentally alert.

The tournament in December is the Capcom Cup 2018, which will be held at the Esports Arena in Las Vegas.

Over two days, the world’s best Street Fighter V: Arcade Edition players will compete for the world championship. The winner gets a cool US$250,000 (RM1.04mil).

Besides the audience at the arena, the games will be streamed live and watched by millions of fans around the world. 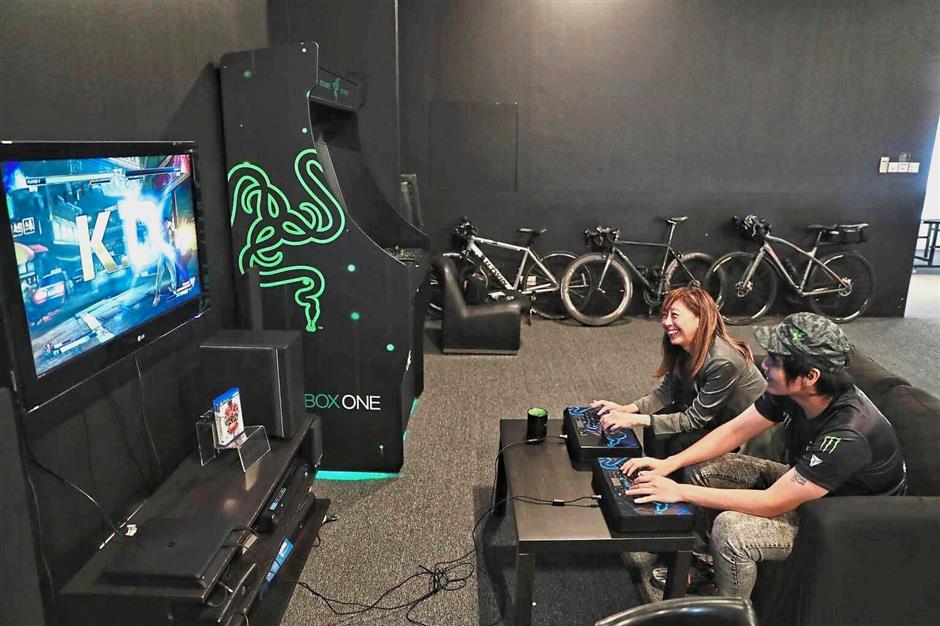 Xian: I’m very normal, like I have a girlfriend, I go for movies and I look for good food online.

Xian, as he is widely known, is a professional gamer, one among a very small number in Singapore.

He plays Street Fighter, a classic arcade fighting game launched in 1987 which has seen many updates.

He is currently ranked 17th in the world.

In 2013, he became Singapore’s first winner at the Evolution (Evo for short) Championship Series in Las Vegas. Back then, Evo was the single largest fighting game tournament in the world and to come in first was an incredible achievement.

As a pro gamer, he travels around the world to take part in 10 to 15 competitions a year, heading to countries like the United States and Australia and in the region.

While prize money from fighting game tournaments is seldom publicised, competitive gaming resource website esportsearnings.com estimates that he has made at least US$88,000 (RM 366,301) from 42 tournaments so far.

He also gets sponsorships. His main sponsor is Razer, the gaming paraphernalia company started by Singaporean Tan Min-Liang, and he is part of the company’s eSports group Team Razer.

He also has deals with companies like Secretlab, a gaming chair manufacturer, and Monster Energy drink. In addition, he does regular live streams of his own games via the platform Twitch. These videos are watched by his thousands of fans and he gets a share of the revenue.

Xian, 28, arrives for the interview kitted out in attire his sponsors will be pleased with.

A camouflage-print cap with the Razer snake logo is artfully placed atop his styled, long-fringed hair. His black jersey is plastered with the logos of his sponsors.

He has pin-up boy good looks and is a manga-fied version of singer Jay Chou with thick eyebrows, bright eyes, a straight set of teeth and a very clear complexion. He speaks in a soft and quite gentle tone.

He puts in five to six hours of Street Fighter practice daily from around midnight, which means he sleeps around dawn.

“The connection is more smooth at that time,” he says. “In fighting games, lag is quite important.”

When I confess I know very little about gaming, he replies almost apologetically: “I hope you won’t have a bad impression of gaming.”

He wants to correct misconceptions people might have of gamers.

“A lot of people think gamers are either like gangsters or nerds. But I really don’t think we are,” he says earnestly.

“I feel like I’m very normal, like I have a girlfriend, I go for movies and I look for good food online. I’m just like a normal person, so I try to change that image of gamers.”

His girlfriend of five years, Jen Tan, 30, is a tattoo artist. They met playing games at an arcade in Bugis.

He knows a lot about arcades.

He grew up in Yishun and Ang Mo Kio before his family moved to Hougang, where he now lives in a one-room flat with his parents and brother.

His father is a taxi driver and mother a Singapore Pools cashier. His brother, older by three years, is a teacher.

His first visit to an arcade – in Yishun – was when he was seven.

“Back then it was very messy.

“There were a lot of gangsters and I wouldn’t say it was the best place to go to.”

But he loved playing arcade games and his mother would drop him and his brother there while she went shopping.

“I traded results to go,” he says.

If he did well in Chinese spelling, for example, his parents would give him $2 (RM6) to play at the arcade.

“Even though I could finish the $2 in 10 minutes, 20 minutes, I just liked to watch. I would stay for seven, eight hours.”

He liked fighting games like The King of Fighters, Street Fighter and X-Men because every time he won, he would get credits which allowed him to continue.

He was in the Express stream at Yio Chu Kang Secondary School and was an average student.

After his O-levels, he decided to work rather than try for a place at a polytechnic.

“At that time, money felt more important to me. That was the wrong decision, thinking back.”

He did a series of odd jobs before he enlisted in national service, including as a waiter, home mover and office worker.

He was a storeman during national service (NS) and continued to play games. By then, he was making a name for himself in tournaments. He focused on Street Fighter because he liked how competitive it is, and also because it has high prize money for a single-player game.

His parents were supportive and several times during the interview, he expresses his gratitude for how open-minded they were to let him chase his passion.

“They always tell me to do whatever I want in my life, but just excel in it. They are very open-minded. “

Along the way, there were benefactors who changed his life.

Around the time he was finishing NS, he met Koh Yong De, a Singaporean who had spent some time in the US. The gaming enthusiast held gaming tournaments in Funan Centre and was impressed by his fighting skills.

He took Xian under his wing, taught him to shoot videos, be more marketable and also opened a cafe in Parklane Shopping Mall called Tough Cookie Gaming Cafe where they would stream games and train.

There was also Lenn Yang, now 36, who was in corporate IT and events and also a passionate gamer. He saw video clips of Xian in action and after a meeting, started paying for him to travel overseas for tournaments.

“I really appreciated that,” Xian says. “I have met very great people in my life.”

After NS, he travelled regularly to compete in games. The 2013 trip to Las Vegas for the Evo Championship was sponsored by Mr Yang.

Koh was there to support him and brought along a Singapore flag.

“I only realised this when I won, when they passed me the Singapore flag.

“I wasn’t expecting him to be bringing it along as I didn’t think my chances of winning were high.”

The win created waves in the community and Razer came forward with its sponsorship.

He describes himself as a competitive person who loves to win. Gaming gives him that satisfaction and on a daily basis.

When he meets an opponent he can’t beat, it drives him to do better and he relishes that competitive spirit. He points out that in other professions, happiness and satisfaction might come from a promotion, which you would get only at the end of a long year.

I ask him what attributes a pro gamer should have.

He says that while natural dexterity and quick responses help, a passion for the game and hard work are more important.

He spends a lot of time practising and also studying videos of his opponents’ playing style. “You study the bad habits they have and how they approach the game.”

There are cultural differences.

“Japanese players may be more conservative, so they are maybe more defensive. Sometimes American players are more aggressive.”

He tries not to have a style so others can’t read his next moves. “I usually try to identify the problem and adapt to it and move on.”

Beyond the community of gamers, few here might know who Xian is, or for that matter Daryl Koh. Also known as iceiceice, Koh, 28, is Singapore’s most successful eSports player. He plays the multiplayer game Dota 2, and has reportedly earned more than US$1 million in prize money.

eSports – much less a career in it – doesn’t get much mainstream acceptance or recognition here, even though its popularity is growing worldwide and it’s a multi-billion-dollar business.

eSports will be part of the 2022 Asian Games but there’s still debate on what sort of games should be included. There are issues such as the violent content of most games and the lack of industry regulators.

Xian is optimistic things will change and that more will start thinking of gaming as a viable career option.

“When I was young and if you said you can play games and make money, people will say it’s a joke,” he says. “Now you can google on how to become a pro gamer.”

He points out that when a gamer retires from competitive gaming, he can move to other areas in the industry, like organising tournaments, streaming and commentary.

In fact, earlier this year, a diploma in eSports and game design was launched here. It teaches skills in areas like game development, eSports knowledge, team management and programming.

I wonder what he writes as his occupation in immigration forms.

“At the start, honestly, I didn’t write ‘pro gamer’ because I felt very embarrassed, you know, that I come here to game, so I just put a dash,” he says.

“But now I’m actually kind of proud that I’m a professional gamer, so I do write that. It’s cool also anyway. Things have changed.”

Over the past year, he has been paying it forward. Like how Koh and Yang had supported him, he has sponsored local qualifiers and paid for good gamers to accompany him to overseas tournaments.

He’s not ready to hang up his joystick just yet. Street Fighter gamers can go on till they’re 40, as some recent winners prove, he says.

“Discipline and experience are actually more important than reaction for fighting games.”

After lunch, we head to the Razer office in Chai Chee to try out a game of Street Fighter.

He tries to explain it to me but when he sees I clearly can’t grasp what he’s saying, gently tells me that the game is quite complicated and will take time to understand.

We try a game anyway, and I’m of course knocked out in a matter of seconds. – The Straits Times/Asia News Network