Decision on top posts contest to be known today KUALA LUMPUR: Whether there will be a contest for the top two posts in Umno will be known at the end of the general assembly today, says Datuk Isham Jalil.

The Umno information chief said for now, no one had officially announced their candidacy for either the president or the deputy president post.

“I believe those who want to contest would want to wait and see what is the general assembly’s decision on the matter, which we will know on Saturday,” he said.

Earlier in his presidential address, Umno president Datuk Seri Dr Ahmad Zahid Hamidi said that he would leave it to the delegate to determine whether there should be a contest for the top two posts.

Isham also said debates on the presidential address were carried out behind closed doors as Umno is facing a critical time.

He said some delegates had requested for attendees to discuss the motions tabled openly but among themselves only.

“We decided to hold the meeting behind closed doors because if we open it to the media, we’re afraid it would have restricted discussions. “Other political parties would also know what we discussed,” he said.

However, Isham said the closed-door meeting was a one-off thing.

“This time, it was due to different circumstances as we really wanted to discuss it among ourselves,” he said.

Separately, a video showing an Umno general assembly delegate being booed for tabling a motion for the top two positions not to be contested in the upcoming party polls has gone viral on social media.

The 14-second clip showed delegates at the Umno general assembly yesterday booing the delegate as he debated the party’s policy speech on stage.

It is learnt that the delegate had proposed that the top two posts should not be contested and as he spoke, delegates started booing at him.

However, the incident could not be seen from the media centre as none of the debates were screened there.

Umno supreme council member Datuk Puad Zarkashi said the delegate was booed because he kept on repeating his point.

“When he initially brought up the matter, the delegates had listened to his argument. But when he kept repeating, I guess the rest got annoyed with him,” he said.

However, Puad said it was not as if the hall had hackled the speaker, adding that only a few booed him.

Party to act against the ‘traitors’

There was no secret pact with Pakatan, says Zahid 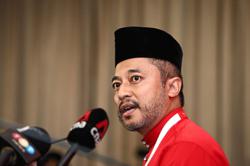