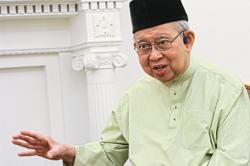 KOTA BARU: Barisan Nasional candidate for the Gua Musang parliamentary seat, Tengku Razaleigh Hamzah, has filed an election petition at the High Court here to challenge the outcome of the 15th General Election (GE15) for the parliamentary constituency.

Lawyer Mohamed Baharudeen Mohamed Ariff, representing Mohd Azmi, said the petition, among others, seeks to declare as the election result for the Gua Musang parliamentary constituency invalid and for the EC to call for a by-election for the seat.

"The petition was filed to challenge the GE15 result for the Gua Musang parliamentary seat which allegedly involved money politics.

"Our client claims that the ballot boxes from certain polling district centres were unaccounted for and the ballot papers were not returned," he said in a statement on Friday (Jan 13).

The court has fixed Jan 25 for the next case management.

In GE15, Tengku Razaleigh, or fondly known as Ku Li, failed to defend the Gua Musang seat when he lost to Bersatu candidate Mohd Azizi.

Mohd Azizi won the seat with a slim majority of 163 votes when he obtained 21,826 votes while Tengku Razaleigh garnered 21,663 votes. – Bernama