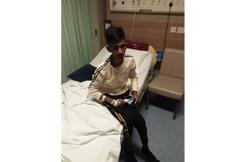 Needs urgent help: Kavinraj, who is suffering from Superior Mesenteric Artery syndrome and is awaiting surgery at a private hospital.

The 16-year-old from Balik Pulau has been in and out of hospitals since then, and his weight has dropped from 45kg to 31kg.

His father S. Thangrajan, 47, a lorry driver, said Kavinraj, the youngest of two children, started complaining of a severe headache last March, which was followed by continuous vomiting.

“He was unable to hold down any food or liquid, and I took him to three different hospitals – he underwent numerous scans before doctors discovered his condition.

“The doctors advised my son to undergo surgery as soon as possible and his surgery had been scheduled for tomorrow.

“However, they had to postpone it indefinitely as Kavinraj is too undernourished to go through the surgery,” he said when contacted yesterday.

SMA syndrome is defined as compression of the third portion of the duodenum between the abdominal aorta and the superior mesenteric artery.

Thangrajan said Kavinraj’s surgery was expected to cost about RM150,000, and so far, he was able to come up with about RM50,000 from his medical insurance and donations by well-wishers.

“As a lorry driver, my monthly income is about RM3,500, and as I am the sole breadwinner in my family, I am unable to raise the balance as I have also exhausted most of the amount allowed under my medical insurance card,” he added.

Thangrajan’s wife, S. Valarmathee, 43, is a housewife and the couple has an 18-year-old daughter too.

Those who want to know more about Kavinraj’s condition may contact Thangrajan at 016-732 3576. 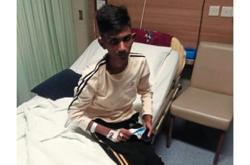