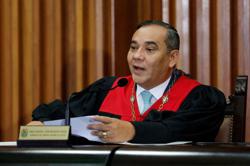 According to Pekan District Police Chief Supt Mohd Zaidi Mat Zin, the 63-year-old victim said he was in Felda Chini Timur 2 last Dec 1 when he received a call from a man claiming to be a police officer from Ampang, Selangor.

"The victim was told that he was suspected of being involved in money laundering and corruption and required to give details of his bank accounts before he was asked to transfer all his money in his Maybank account to a Bank Islam account.

"The victim did as told and transferred his money in stages between last Dec 1 and Dec 6.

"However, on Wednesday (Dec 7), when the victim checked the balance in the Bank Islam account, he found the money had been transferred to several unknown accounts," he said in a statement on Saturday (Dec 10).

The victim, who realised that he had been cheated, then lodged a police report last Wednesday and the case is investigated under Section 420 of the Penal Code for cheating. - Bernama