By ALEX TENG and IMRAN HILMY

ALOR SETAR: The Perikatan Nasional “green tsunami”, which swept everything in its path in Kedah by winning 13 out of the 14 parliamentary seats in the 15th General Election (GE15), has continued to grip voters in Padang Serai.

Although the victory will not have any bearing at the federal or state level, it is still a big showing for Perikatan, which is now the Opposition, after its candidate clinched a thumping majority of 16,260 votes.

Azman’s majority almost doubled that recorded in 2018 by Pakatan’s incumbent M. Karupaiya, whose death three days before voting caused election for the seat to be postponed to Dec 7.

“This latest result can be interpreted as a sign that the majority of voters in Kedah are rejecting the Barisan Nasional and Pakatan Harapan alliance.

“These two coalitions will have to work harder to win back the voters’ trust,” he said.

During last month’s election, Perikatan had romped home with 13 parliamentary seats, leaving Pakatan with only one seat compared to the five it held before Parliament was dissolved.

On Wednesday, Azman, who is also the Lunas assemblyman and a state executive councillor, and Mohamad Sofee, a lawyer, were involved in a four-way tussle with Hamzah Abd Rahman (Pejuang) and Independent Sreanandha Rao.

Barisan’s Datuk Sivarraajh Chandran, of MIC, had pulled out of the race a week before polling day, in view of the Barisan-Pakatan collaboration in the federal unity government.

Hamzah and Sreanandha lost their deposits after registering only 205 and 352 votes, respectively.

In his speech after the official announcement of the Padang Serai results, Azman said he aspired to work with Tan Sri Muhyiddin Yassin, the Perikatan chairman and Bersatu president, and other MPs to serve as a credible Opposition.

“I will represent the voices of the Padang Serai constituents in Parliament,” he said at the Kulim Hi-Tech Sports Complex Hall.

Azman, a former teacher known as Cikgu Azman to locals, added that he would not be defending Lunas in next year’s state election to make way for younger leaders.

The 50-year-old had won Lunas – a state seat under Padang Serai – on PKR’s ticket before he and another PKR assemblyman quit the party in May 2020 to support Perikatan.

Their move triggered the collapse of the Pakatan state government led by Datuk Seri Mukhriz Mahathir.

PKR had also lost the Permatang Pauh parliamentary seat, a fortress for the party that had not been broken for 40 years until Nov 19.

A total of 46 polling centres with 230 voting streams were opened for Padang Serai. Turnout was 68.9%. 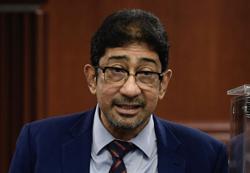 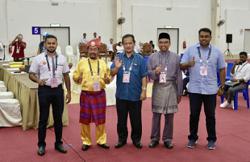