GEORGE TOWN: Driver G. Thinesh used to worry about the cost of repairing his artificial leg, which he has been wearing for the past 15 years, as the rising cost of living left him with very little, especially now that he has a wife and two young children to feed.

But today, thanks to the Repair Free Prostheses Programme of the Che Hoon Khor Moral Uplifting Society (MUS) in Macalister Road, Thinesh and other amputees who received free prosthetic limbs can look forward to getting their prosthetic limbs repaired for free.

Thinesh, 36, who has been wearing his artificial left leg since the age of 21, was born with a condition called neurofibromatoses, which causes tumours to form on nerve tissues.

“The tumours on my left leg would grow to the point where I couldn’t lift my leg, and the pain became unbearable.

“I had my leg amputated and started wearing a prosthetic leg at the age of 21, and I felt so much better because my leg felt lighter, and I could walk better too,” he said.

Thinesh said that in 2019, he first heard about the Free Prostheses Programme (FPP) organised by the Che Hoon Khor MUS under the patronage of Her Royal Highness the Princess Mother of Thailand and applied to receive a free artificial limb. Thinesh expressing gratitude for the free resources provided by the society.

He is thankful that the society has also introduced the programme to provide repair services, as it has helped reduce the financial burden of those in the lower income bracket.

“Previously, whenever my prosthetic had any problems, I used to go to a private centre which would cost me anything between RM100 and RM600, and in the long run, I could not afford it,” said the father of a 10-year-old boy and an eight-year-old girl.

Thinesh, who earns about RM1,200 per month as a van driver for a private company, said he attended the Repair Free Prostheses Programme recently after receiving a letter from MUS asking if he needed any repairs done on his prosthetic limb.He was accompanied by his wife, N. Thanalakshimi, 35, to the programme, which was held over two days, to have the damaged sole of his prosthetic limb repaired.

A total of 16 amputees from Johor, Selangor, Kedah and Penang had received letters from MUS inviting them to attend the repair workshop, which saw representatives of the Limbs for Life Prostheses Centre (a welfare project of the Bandar Utama Buddhist Society) from Petaling Jaya, Selangor, provide necessary repair services and maintenance advice.

The society’s president, Datuk Sim Ah Chye, said the society was supposed to have held its sixth FPP this year, but due to the uncertainty of the pandemic, it has been postponed to 2024.

“The last Free Prostheses Programme was held in 2019, and to date, we have successfully fitted a total of 1,008 units of prosthetic limbs, which cost more than RM1mil,” he said.

The FPP is a joint effort between the Che Hoon Khor MUS and the Prostheses Foundation of H.R.H. the Princess Mother of Thailand, which was initiated in 2007.

Limbs for Life Prostheses Centre administrator Angeline Tan, who conducted the repair workshop with her technician R. Paramasivam, said amputees usually came in for repairs due to the wear and tear of their artificial limbs.

“For those who are fitted with artificial legs, it is important for them to wear flat shoes and be taught the proper way to wear their socks as it affects the blood flow,” she said. 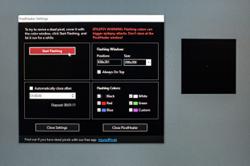