Green efforts: The MOPP and Hutan partnership is a finalist for the prestigious environmental prize.

KOTA KINABALU: A pioneering partnership between a non-governmental organisation and an oil palm plantation in Malaysia was selected as one of the 15 finalists for The Earthshot Prize 2022, the world’s most prestigious environmental prize led by Prince William and the Royal Foundation.

Melangking Oil Palm Plantation (MOPP) and Hutan, a grassroots wildlife research and conservation programme, have partnered since 2017 to develop practical solutions for a more peaceful coexistence between wildlife and people in the Kinabatangan floodplain in Sabah’s east coast.

“I was proud to find out that, here in Malaysia, one of our plantations has been recognised for its efforts to build global biodiversity conservation solutions,” Malaysian Palm Oil Council chief executive officer Wan Aishah Wan Hamid said in a statement.

“This is very inspiring, and I hope it will lead to positive changes and a new mindset of optimism and innovation,” she added.

Dr Isabelle Lackman, Hutan’s co-founder, said that in Kinabatangan, exploitation has resulted in forest fragmentation, leaving wildlife with too little room to live. Research findings has guided the NGO to work with forward-looking oil palm growers to create wildlife corridors across the landscape. — Cede Prudente

With only small pockets of forest left, endangered wildlife have no choice but to encroach on people’s lands, resulting in increasing human-wildlife conflicts.

“Our research findings over the past 25 years have guided us to work with forward-looking landowners to create wildlife corridors across the landscape, ensuring safe passage, food and shelter to orangutans, elephants and other species,” said Lackman.

The Earthshot Prize, which was first awarded last year, is an annual award created by Prince William, targeted at funding projects which aim to save the environment.

Each year, five Earthshot Prizes of £1m (RM5.3mil) will be awarded each year until 2030 in support of environmental innovation projects for the future.

Besides Prince William, among those in the panel to choose the winners from the 15 finalists are Sir David Attenborough, Brazilian footballer Dani Alves, Fijian activist Ernest Gibson, actress Cate Blanchett and entertainer Shakira.

MOPP’s plantation head Muhammad Al-Shafieq Mustafah said it was a great honour to be a finalist in a robust group of 15 exceptional projects from around the world.

Malaysia is the world’s second-largest producer of palm oil which is often criticised as being damaging to nature.

“Past mistakes have often been used to highlight the industry’s negative impacts, but what we don’t hear much about is that 98% of the oil palm plantations in Malaysia have now been certified under the mandatory Malaysian Sustainable Palm Oil (MSPO) standard which prohibits deforestation and requires responsible methods for sustainable palm oil production,” Wan Aishah pointed out.

“If the Earthshot Prize can recognise the efforts of MOPP’s innovation mindset as a ground-breaking solution for protecting the planet, then we all should too,” she said. 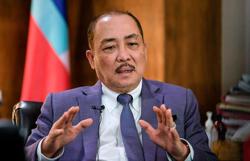