PM: No salary for me at all

PUTRAJAYA: Datuk Seri Anwar Ibrahim will not receive any salary, both as Prime Minister and as Finance Minister, he has clarified.

Cabinet ministers have also agreed to a 20% pay cut until Malaysia reaches economic recovery, he said.

Rubbishing talk that he would be paid as Finance Minister although he had declined the salary for the top job, Anwar announced he would not be taking any form of government salary.

This was in line with his promise made during the election campaign, he said.

During the campaign, Anwar had said he would not take a salary if he was appointed as prime minister because the people themselves were struggling to cope with rising costs.

“Some people say I’m not taking the Prime Minister’s salary because I am the Finance Minister. That’s not true. There is only one salary,” he said, laughing off such claims during a press conference here yesterday.

ALSO READ: Budget to be enhanced with MOF, Cabinet views

The Members of Parliament Act (Act 347) only allows one salary for ministers, deputy ministers or political secretaries.

On the Cabinet ministers’ pay cut, he said this was their way of acknowledging the tough times faced by the people.

“The pay cut will be implemented as long as Malaysia continues to recover economically.

“It shows the ministers are also concerned about the livelihood of the public,” he said.

Asked if the pay cut would be carried out throughout the government’s five-year tenure, he simply said that it could range from three to five years, depending on the situation.

Cartels’ role in egg supply to be curbed 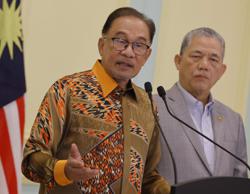