PUTRAJAYA: DAP secretary-general Anthony Loke stresses that the unity government is with Barisan Nasional and not about Datuk Seri Ahmad Zahid Hamidi.

"The unity government involves Barisan Nasional. It is not about Ahmad Zahid or any particular individual.

He said the Cabinet's agenda was focused on the rakyat and the country, instead of discussing "personal court cases".

"The unity government involves a coalition. I think everyone in DAP understood that,” he added.

Asked whether Barisan had “threatened” to pull out of the unity government if Ahmad Zahid was not appointed to the Cabinet, Loke dismissed this.

He said they had been working quite well so far and there was no such thing as threatening each other.

“We don’t want to start off so negatively by threatening each other. No threats were made,” he said.

He said there was a need to understand the context of forming a unity government.

"There is a principle that must be followed; who will represent the coalition, for instance. We need to have an understanding of this principle. If we don't respect it, then this coalition will not be successfully formed," he said.

Loke also explained that DAP had given its support to Datuk Seri Anwar Ibrahim to become Prime Minister without setting any condition for the number of Cabinet positions that DAP would get.

Acknowledging that there were DAP members who felt the party was under-represented in the Cabinet, Loke however maintained that the party’s struggle was not for positions, but for the country.

"We have been given major and important ministerial portfolios,” he said.

He said the party was even willing to sacrifice itself if it were a "stumbling block” to the formation of an Anwar-led government.

The DAP won 40 parliamentary seats in the 15th General Election. 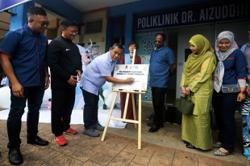