PETALING JAYA: There can be no honeymoon period for the new unity government under Prime Minister Datuk Seri Anwar Ibrahim, which should get to work immediately, says Federation of Chinese Associations Malaysia (Huazong) president Tan Sri Goh Tian Chuan.

He said the unity government's priority is to revive the country's economy and reduce the people's cost of living.

"This all needs to be done by the government, businesses and people working together," said Goh in a statement on Saturday (Dec 3).

He said the unity government under Anwar had two main features, namely a lean Cabinet and a Deputy Prime Minister from the Borneo states.

Goh also said that the forthcoming announcement of deputy ministers should not result in a bloated Cabinet.

He urged the government to maintain the pluralism of deputy ministers for the unity government.

"The Prime Minister should appoint Chinese deputy ministers to assist the government in areas of concern to the Chinese community, such as the Economy and Education Ministries.

"The government should also reflect on and coordinate suggestions from the Chinese community more effectively," he added.

Meanwhile, Goh said that of the 28 ministers, only five or 17.8%, are women, adding that he hoped to see more suitable and competent female deputy ministers appointed, including those of Chinese ethnicity. 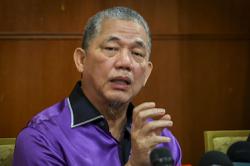