PEKAN: The newly formed Barisan Nasional and Pakatan Harapan state government should put aside political ideology and sentiments, says the Regent of Pahang.

“Now is no longer the time for politics; enough is enough,” Tengku Hassanal said.

“The election has ended and the state government has been formed. Now is the time to work.

“In the process of achieving a developed state, the people no longer want to see you (elected representatives) continuing with politics, looking for faults here and there.

“On the other hand, the people want the elected representatives with positions in the government to bring about change so that Pahang continues to move forward,” the Regent added.

As for the opposition-elected representatives, Tengku Hasanal said they should provide effective checks and balances by doing the job professionally and in a mature manner by giving advice and ideas to improve the state’s administration.

The Regent also advised the elected representatives to be clear of their intentions and not to abuse their positions to become rich, saying that he would do a spot check on them.

“The respect of becoming an elected representative is not because of the title ‘Yang Berhormat’, but for solving the people’s problems.

“As elected representatives, they should work diligently, go down to the villages in their constituencies to always see what needs to be taken care of, and if there are issues that cannot be resolved, let me know.

“I want to remind all quarters that the issues on race and religion should not be politicised.

“Do not sacrifice development and progress for political ideology and interests.

“It has been 65 years since the country achieved its independence; we should be running, instead of crawling .... Do not let immature politics take us backward,” he added.

He hoped there would be close cooperation between the state and federal governments for the development of the state and well-being of the people.

In developing Pahang, he said, efforts made should be in line and consistent with the concept of environmental, social and governance (ESG) and environmental sustainability.

“I do not reject development but it must be done in a controlled and sustainable manner so that we can enjoy the progress with an increase in the state’s revenue, but while preserving our treasures,” he added. 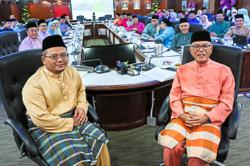