"My warmest congratulations on your victory at the 15th General Election and on being sworn in as Malaysia’s 10th Prime Minister,” said Lee in his congratulatory letter to Anwar.

"Congratulations also to Pakatan Harapan (PH) for its strong performance at the General Election,” added Lee.

Lee said that he looked forward to meeting Anwar soon, "to discuss the common issues facing the two countries and how we can further advance our bilateral relationship.”

"Ho Ching and I wish you and Datuk Seri Dr Wan Azizah Ismail good health and happiness,” he added.

Lee noted that Anwar’s premiership comes amidst significant challenges in "our regional and global environment.”

"As close neighbours and friends, Singapore and Malaysia should work together to manage these challenges and explore new opportunities for cooperation,” he said.

According to Lee, Singapore and Malaysia share a longstanding substantive relationship, underpinned by "our historical ties, multi-faceted cooperation, and strong people-to-people links.”

Throughout the Covid-19 pandemic, Lee said the two countries have been steadfast partners supporting each other.

"The close coordination between our ministers and officials allowed us to maintain the flow of essential goods and workers, and to re-open our borders swiftly and effectively.

"We have also been close partners in Asean, which remains central to stability in Southeast Asia amidst rising geopolitical tensions,” said the prime minister.

Foreign missions in the country have also sent congratulatory messages to Anwar.

The first congratulatory messages, which came in soon after Anwar took oath at 5pm, was from the United States (US) Ambassador to Malaysia Brian D. McFeeters.

"Congratulations to Anwar Ibrahim on his election as Malaysia’s 10th Prime Minister. US Embassy Kuala Lumpur looks forward to continuing to strengthen the US-Malaysia strategic partnership under your leadership,” he said in a message posted to the embassy's official Twitter account, @USEmbassyKL, on Thursday.

Lee also posted a picture of him and Anwar.

"The Australian High Commission looks forward to working with your team under our Comprehensive Strategic Partnership,” he tweeted.

"Congratulations to YB Datuk Seri Anwar Ibrahim, @anwaribrahim, who has been sworn in as the 10th Prime Minister of Malaysia,” he tweeted. 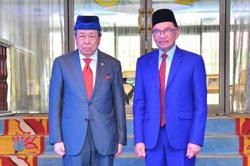