KUALA LUMPUR: The 30 MPs of Barisan Nasional were in the centre of all the drama as a flurry of meetings were held with still no decision on the new Federal Government.

It’s been four days since results of the 15th General Election (GE15) yielded a hung Parliament, but with the King and his fellow royals stepping in, there could finally be an end to the impasse very soon.

Yesterday, the King summoned the 30 MPs for an audience before him at 10.30am at Istana Negara.

The MPs, who had asked for a postponement of the audience a night earlier, did not show up.

A convoy comprising the Sarawak party leaders was seen entering Istana Negara at about 11.05am.

Among the GPS representatives were Datuk Seri Fadillah Yusof and Datuk Seri Alexander Nanta Linggi, both from Parti Pesaka Bumiputera Bersatu (PBB). They left about an hour later.

Following the meeting, GPS said it would wait for the Yang di-Pertuan Agong’s decision on the appointment of the 10th prime minister.

Istana Negara then issued a statement saying the King would be meeting his fellow Rulers at a special gathering at 10.30am today.

It is understood His Majesty will be seeking the opinions of his brother Rulers on breaking the impasse. Both Muhyiddin and Anwar have been named as prime ministerial candidates by their respective coalitions, although neither has the majority to form the government.

On Tuesday, Muhyiddin had turned down a suggestion that both coalitions form a unity government.

Muhyiddin himself left his residence in Bukit Damansara at 8am and returned at noon. Media personnel had gathered there as early as 8.30am.

He did not stop to address the media but Bersatu, of which Muhyddin is president, made sure they were well fed.

It is believed Muhyiddin and Hamzah took the same vehicle to go to the St Regis Hotel for a meeting with Barisan leaders shortly after.

The meeting at St Regis Hotel ended after about two hours but none of the leaders met the media as they left using the hotel’s back entrance.

Anwar, meanwhile, left his residence at Sungai Long at about 11.20am. He stopped to tell the media he was on his way to “tengok wayang” (to see a movie or to watch the drama), leaving newsmen bewildered at his cryptic statement.

He arrived at his office in Bukit Gasing half an hour later.

Nik Nazmi said it was a normal PKR meeting while Adam said it was to talk about the recent racial sentiments that were being fanned by some for self-interest.

All of them left just before 4pm.

There was food at the Anwar camp too. His aides handed out packets of turmeric fried chicken to the media gathered there. There was also pisang goreng available.

And Anwar continued to tease the media as he left at about 4.50pm.

“Here is some popcorn, go watch a movie,” he said, winding down his window.

Several of his officers later came out and handed out bags of GSC popcorn.

It was not confirmed if Anwar was rushing off to attend Pakatan’s candidate announcement for the Padang Serai by-election in Kulim, Kedah at 8.30pm yesterday.

At the same hour, Umno leaders were huddled at their headquarters at Menara Datuk Onn for a supreme council meeting. 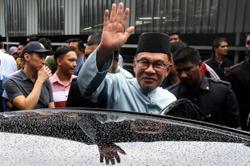