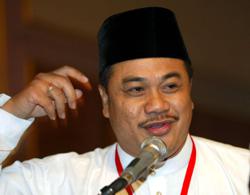 KUALA LUMPUR: Voters at the Kg Pasir football field and the Kg Kerinchi football field in Lembah Pantai had to wade through muddy fields and giant potholes filled with rainwater to cast their votes on Saturday (Nov 19)

Some waded through the mud in their slippers and loafers which proved to be a disaster.

K. Muthuletchumi from Jalan Kelang Lama regretted two things when she came out to vote at the Kg Pasir polling station in Jalan Kampung Pasir.

“I should have come later and I should have worn boots. I had to wade through a muddy field that was literally sinking,’’ said the clerk who lives nearby.

“I was warned that if it rains it is going to be wet and muddy, but I did not heed the warning,’’added Muthuletchumi, who wore slippers.

Apart from the drizzle and the mud, all of Jalan Kg Pasir leading to the field was congested and some of the routes were blocked by police at 9am.

“Cars and motorcycles parked at the side made it worse. I was stuck in the lane for 30 minutes, and when I reached a police blockade, they told me to turn back as the congestion was worse further up,’’ added Ahmad Zaki, a teacher from Taman Sentosa.

Over at the PPR Kg Kerinchi football field polling station, many elderly folk struggled to get to the station on wheelchairs.

“The field was in bad shape, but the Election Commission had set up wooden platforms for voters to use to get to the voting station.

“But they did not anticipate how difficult this would be for the elderly on wheelchairs or those using a walking stick,’’ said Masthura Jamil.

Masthura had brought her 79-year-old grandmother to vote, but faced a hurdle getting her into the polling booth.

“It’s cramped and crowded and the platforms were actually slowing people down,’’ he said.

EC officials were seen on hand helping people who were struggling in their wheelchairs.