KUALA LUMPUR: A total of 14 undocumented migrants were detained by the Immigration Department at Jalan Duta here.

Immigration director-general Datuk Seri Khairul Dzaimee Daud said the foreigners were transported in a bus after entering the country illegally via Chuping, Perlis.

"We received information that a group of foreigners was being transported to Kuala Lumpur in a bus.

"A team of Immigration officers and personnel raided the bus and detained nine men and four women, all Indonesians, at about 10am on Tuesday (Nov 15)," he said in a statement Wednesday (Nov 16).

Checks on the foreigners' passports revealed stamps by Thailand and Malaysia's Immigration departments, believed to be fake, he said.

"They used fake stamps to evade the detection of authorities and to make it seem that they entered the country legally.

"Eight of those detained were blacklisted from entering Malaysia due to previous offences," he added.

Khairul Dzaimee said the syndicate transported the illegal foreigners via a flight from Indonesia to Thailand before entering Malaysia through an illegal land route.

Each suspect admitted to having paid between RM5,000 and RM6,000 to an agent to enter Malaysia, he said.

"They entered the country to work at a place where they previously worked in Kuala Lumpur but under new employers.

"The logistics of their travel were pre-arranged by the syndicate," he said.

All suspects were held at the Putrajaya Immigration depot, he said. 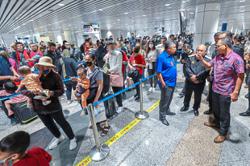 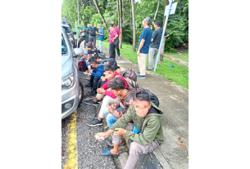