GE15: Takiyuddin says statement on working with Barisan after polls taken out of context

KUALA TERENGGANU: Datuk Seri Takiyuddin Hassan claims his statement on working together with Barisan Nasional to form a mixed government after the 15th General Election (GE15) was taken out of context.

The PAS secretary-general, in a statement posted on his social media Tuesday (Nov 15), said he is convinced that Perikatan would be able to form a government on its own.

"I would like to emphasise that I have full confidence that Perikatan will be able to form a government on its own and that the Prime Minister will be from Perikatan Nasional.

"We believe that the people will be more confident in Perikatan's theme, which is caring, stable and clean," he said.

Takiyuddin was earlier quoted as saying that Perikatan was willing to work with any parties, including Barisan, to form a mixed government after GE15.

He said that they however refused to work with Pakatan Harapan.

Takiyuddin also revealed that there were prior negotiations on the matter but didn't reveal the outcome.

Perikatan chairman Tan Sri Muhyiddin Yassin later issued a statement denying that a mandate had been given to Takiyuddin to negotiate Perikatan-Barisan collaboration after GE15.

Muhyiddin said the purpose of Perikatan contesting in GE15 was to form a government without having to join Barisan or Pakatan Harapan. 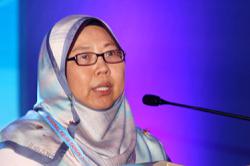