JOHOR BARU: After withdrawing his name as a Perikatan Nasional candidate for the Pulai seat, businessman JR Deepak Jaikishan (pic) will now be contesting in Klang.

However, he will now be contesting as an independent despite earlier saying that he has chosen to join a coalition that embraces his political views.

In a statement on Friday (Nov 4), Deepak said that he chose to drop out as the Gerakan candidate for Pulai under the Perikatan banner.

Perikatan Nasional has made a last-minute switch on its candidate for the Pulai seat where Tebrau Gerakan division chief Loh Kah Yong will be fielded instead of Deepak.

This comes just hours after state Perikatan Election director Rasman Ithnain denied talk of Deepak being replaced with another candidate.

Deepak, who owns a carpet business, became a well known figure in local politics after claiming both Datuk Seri Najib Razak and Datin Seri Rosmah Mansor were involved in the murder of Mongolian Altantuya Shaariibuu.

He had also sued Najib and Rosmah over an alleged conspiracy that he claimed led to him suffering losses.

However, his case was thrown out by the Court of Appeal on Oct 8. 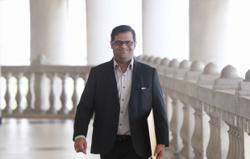