KUALA LUMPUR: The helicopter crash in Cameron Highlands on Wednesday (Oct 26) afternoon during a flight from Kampung Gawin in Gua Musang to Ipoh is the third case involving an aircraft this year.

In the 1.15pm incident, medical personnel from the Flying Doctor Unit (FDU) of the Kinta District Health Department (PKD) were on board the Layang Layang Aerospace Sdn Bhd-owned helicopter when it crashed near Brinchang, resulting in a nurse suffering serious injuries and five others, including the pilot, sustaining light injuries.

The incident claimed the life of flight instructor Fajim Juffa Mustafa Kamal, 52, while Muhammad Din Fikri Zainal Abidin, 62, who was also on the plane suffered injuries.

Following is a chronology of air crashes since 2015:

Oct 4, 2016: A Nuri helicopter crashed on the rooftop of a building in Sekolah Menengah Kebangsaan Balong, Tawau, Sabah. Fourteen military personnel were injured.

Feb 27, 2020: A police helicopter carrying six Air Operation Force (PGU) personnel crashed at the 14th Battalion Camp of the General Operation Force in Jalan Air Panas, Tawau. All of them survived and only one was injured.

Miracle in the highlands

Lucky to be alive as all emerge from wreckage 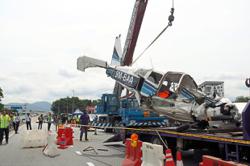