Restaurants get set for big kick-off 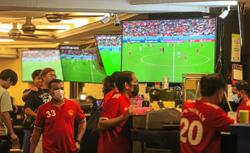 Spirit of sports: Some mamak chains are planning to hire extra hands to handle the anticipated crowd during the month-long FIFA World Cup 2023.

PETALING JAYA: With the FIFA World Cup 2023 just 32 days away, mamak restaurants are gearing up for a surge in patrons who would want to tuck in as they enjoy “live” action from Qatar.

Matches in the various groups are scheduled to kick off at 6pm, 9pm, midnight and 3am during the group stages, which will begin on Nov 20.

Some mamak chains are planning to hire extra hands during the month-long football extravaganza.

“We have installed large viewing screens in most of our restaurants which have Astro services.

“Since in-dining services were allowed to resume earlier this year, many football enthusiasts have come back to catch the live English Premier League matches.

“We will work with a soft drinks company which will also promote its products during the World Cup,” he said, adding that he planned to hire more workers during the period.

“Many have yet to subscribe to cable television services, let alone set up their televisions or big screens. This is because most had dismantled their screens and subscriptions during the Covid-19 lockdowns, when dining in was prohibited.

“We expect the football fans to come back as there is nothing that beats the atmosphere in a mamak restaurant with all the shouting and cheering,” he said, confirming that many restaurants were planning to hire extra staff.

However, Restaurant and Bistro Owners Association vice-president Jeremy Lim said most bistros and late-night eateries under its stable would not be holding live viewing parties due to the high costs.

“Even before the pandemic hit, our customer demographics had begun shifting away from football fans to regular patrons,” he said.

“The pandemic accelerated this shift and now there is little reason to have live viewing parties. There are very few football fans in our customer base now.