PM: Report on Tommy Thomas’ book to be made public

PUTRAJAYA: The report on former attorney-general Tan Sri Tommy Thomas’ memoir My Story: Justice In The Wilderness will be declassified so that it can be made available to the public, announced Prime Minister Datuk Seri Ismail Sabri Yaakob (pic).

“The report on the former attorney-general’s book, as well as that on Batu Puteh, Middle Rocks and South Ledge were presented to the Cabinet on Sept 30 and Oct 7.

“Following the presentation of the report on the book, the government has agreed to declassify the report to the public,” Ismail Sabri said in a statement yesterday.

Following the publication of Thomas’ book last year, various quarters including the Attorney General’s Chambers (AGC), lawyers, politicians and some members of the public said the book allegedly contains elements of incitement, insult and slander.

On Sept 30, the Prime Minister had directed an immediate investigation on Thomas over his allegations in the book about the judiciary, among others.

The order came after the special task force into Thomas’ autobiography had presented a report to the ministers at the Cabinet meeting.

Other members of the team are former judge and former senior federal counsel Datuk Jagjit Singh Bant Singh, lawyers Shaharudin Ali and Balaguru Karupiah, as well as representatives from the Governance, Integrity and Anti-Corruption Center and the Chief Government Security Office.

Thomas was appointed as the attorney general under the Pakatan Harapan government in 2018 but resigned after the administration collapsed in February 2020.

In January, Thomas wrote to the task force, stating that he has no intention of cooperating with the investigation, claiming the creation of the task force was not only unprecedented but without legal basis, and potentially jeopardises the independence of the AGC.

On Batu Puteh, the Prime Minister said that another task force chaired by former attorney general Tan Sri Apandi Ali to investigate the International Court of Justice’s (ICJ) decision on Batu Puteh suggested that there might have been possible negligence on the part of former prime minister Tun Dr Mahathir Mohamad when he withdrew Malaysia’s application to review the ICJ decision in 2018.

“The task force has suggested that the government proceed with legal action at the ICJ in relation to the case, and that appropriate action be taken to protect the sovereignty of the country,” he said.

In 2008, the ICJ ruled that Batu Puteh belonged to Singapore, while the sovereignty over the nearby Middle Rocks was awarded to Malaysia.

The Malaysian government filed an application in 2017 for a review of the ICJ decision. 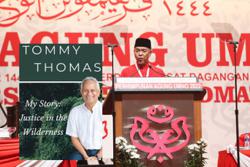