Tan (centre) and his delegation being briefed on the progress of the new ferries that are being built during the visit to the shipyards in Vietnam recently.

GEORGE TOWN The Penang Port Commission (PPC) revealed that the construction of new ferries that will serve commuters travelling between Penang Island and the mainland, has been progressing well at two shipyards in Vietnam.

PPC chairman Datuk Tan Teik Cheng (pic) said the 40% progress on components of the ferry and design has already taken shape and was expected to be completed by June 2023.

"I led a delegation to visit both the shipyards in Vietnam on Oct 3 and 4. The delegation also included representatives from the Ministry of Transport and Penang Port Sdn Bhd (PPSB).

Tan said once the building was completed, the ferries would be first tested in May 2023, before their arrival in Penang by June that year.

PPC believed the rejuvenation of the Penang ferry service would provide a new impetus for consumers who used the ferry service to travel between Penang Island and the mainland.

"The PPSB had earlier called for an open tender aimed at giving the Penang Ferry services a complete makeover.

"A total of 36 companies submitted their bids comprising 23 local companies and 13 foreign companies.

"Nine companies were shortlisted and Damen Shipyards Gorinchem B.V. Netherlands won the tender after meeting the criteria set by the PPC," he said. - Bernama 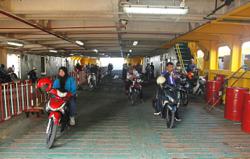