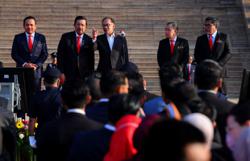 Tengku Zafrul said other financial assistance to be received by civil servants include an additional RM100 to their annual salary increment (KGT) and special financial assistance (BKK) of RM700 from Grade 11 to 56 announced by Prime Minister Datuk Seri Ismail Sabri Yaakob on Aug 30.

"The Malaysian Family is thankful for the dedication, concern and understanding by the government to ease the burden of civil servants," he said when tabling the Budget 2023 in Parliament on Friday (Oct 7).

Also among the initiatives is the authorisation of early redemption of rest leave compensation (GCR) for up to 50% or a maximum of 90 days compared with the previous 80 days.

The Prime Minister had earlier announced an increase in the maximum number of days for the cash award in lieu of leave (GCR) to 180 days, from the current 160 days.

He added that to help the unemployed group, the government would develop 13 MyFutureJobs satellite centres at UTC throughout the nation with an allocation of RM8mil. – Bernama