PETALING JAYA: Any muzakarah (religious discussion of an issue) decision must take into account the rights and interests of non-Muslims, as legally guaranteed under the Federal Constitution, says Selangor Ruler Sultan Sharafuddin Idris Shah.

Sultan Sharafuddin emphasised that Malaysia is a multiracial country and that the teachings of Islam that showed mercy to all, including those of different faiths, must always be highlighted.

The Selangor Sultan, who is also the National Council of Islamic Religious Affairs (MKI) chairman, said the MKI muzakarah committee played a very important role and function in the Muslim community in Malaysia and is a tower of legal reference at the national and international levels.

However, since each state had its own fatwa committee, there is bound to be conflicts between state fatwas and muzakarah decisions at the national level as well as between one state and another.

"This conflict and non-uniformity creates confusion and problems for the Muslim community and has implications for the economic development of the country.

"Therefore, one of the important functions and tasks of the MKI muzakarah committee is to coordinate the issuing of laws and fatwas for the states in Malaysia.

"This legal ruling by the muzakarah committee is a collective ijtihad (ijtihad jama'i) of all the muftis of the states assisted by experts in certain fields," said Sultan Sharafuddin in his speech during the 121st MKI muzakarah committee meeting at Masjid Sultan Salahuddin Abdul Aziz Shah, Shah Alam, Selangor on Wednesday (Oct 6).

Sultan Sharafuddin added that the coordination and standardisation of fatwas by the muzakarah committee do not touch or affect the authority of the Sultan and Rulers in the states as the Head of Religion, as stated by Regulation 9 (1) of the MKI Regulations 2022.

According to procedure, the decisions and views of the muzakarah committee would be informed to the MKI, which was chaired by Sultan Sharafuddin.

The decisions and views would then be submitted together with its recommendations to the Council of Rulers before they were adopted by the state fatwa committee and applied in the state government gazette.

"No other party including the Minister in the Prime Minister's Department (Religious Affairs) or the Islamic Development Department (Jakim) can make the statement.

"This is important to ensure that muzakarah decisions at the national level and fatwas at the state level are not influenced by elements of party politics," said Sultan Sharafuddin.

He added that Jakim only acts as the secretariat of the MKI muzakarah committee.

Sultan Sharafuddin also advised muftis to refrain from religious disputes in the public space, especially if the issue had been decided on together in the muzakarah space.

The Sultan added that disputes between muftis and religious experts should not become a public spectacle, as it will only lower their authorities.

"Appropriately, the differences of opinion of these scholars should only be discussed in the muzakarah and are not brought out of the muzakarah court," said Sultan Sharafuddin.

He also decreed the muzakarah committee to draft rules and manners for differences of opinion between the committee members, adding that there also needs to be civility in differing opinions.

Recently, a top hotel in Petaling Jaya had come under fire after placing a "non-halal" sign on one of its lifts, which it used to transport non-halal items.

Lawyer and social activist Siti Kassim had first posted a picture of the non-halal lift on social media and questioned the rationale behind it.

The hotel said it was part of the halal certification requirements by local authorities and that they had since changed the signage on the lift. 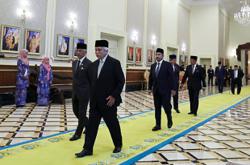