KUALA LUMPUR: The pre-Cabinet meeting was a normal weekly routine between the King and Prime Minister, says Istana Negara.

The palace, in a statement Thursday (Oct 6), added that the meeting was for the Yang di-Pertuan Agong Al-Sultan Abdullah Ri'ayatuddin Al-Mustafa Billah Shah and Datuk Seri Ismail Sabri Yaakob to discuss and exchange opinions in regard to government affairs.

ALSO READ: Ismail Sabri leaves Istana Negara after spending about an hour with the King

“His Majesty agreed to meet Ismail Sabri for the pre-Cabinet meeting at Istana Negara on Thursday.

“The Pre-Cabinet meeting is one of His Majesty's main weekly or routine activities to discuss and exchange opinions with the Prime Minister regarding matters and issues related to the government,” the statement read.

Meanwhile, a media personnel are currently gathering at Menara Dato’ Onn in Kuala Lumpur where Ismail Sabri was reportedly having a meeting with Umno's top leaders following his audience with the King.

As of press time, none of the top leaders were sighted at the building.

Earlier, the Prime Minister had left the palace at 4.45pm without addressing the media.

Ismail Sabri, who arrived at Istana Negara at 3.49pm, left the palace less than an hour later.

He was only seen waving to the media as he drove away. 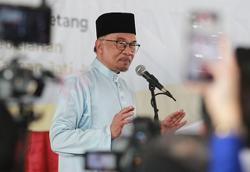