IPOH: The Pakatan Harapan component parties in Perak have nearly reached a consensus on seat allocation for the upcoming 15th General Election.

“Discussions have been done a few times and we have about 1-2 remaining seats left for negotiation.

“Since there are former Parti Pribumi Bersatu Malaysia (Bersatu) seats to be divided, there should be enough seat allocation for the three parties,” he told The Star on Wednesday (Oct 5).

He said, however, the former Bersatu seats were not divided equally among the three component parties.

“While the discussions are still ongoing, the negotiations have gone on smoothly,” he said.

“The negotiations on state-level can be considered done, with just a few seats that are still pending and awaiting the approval from the Pakatan presidential council.

“The principle of our negotiation is that we retain our incumbent seats and just divide Bersatu seats among three components,” he said.

Tan added that if the Malaysian United Democratic Alliance (Muda) is accepted by the coalition, the decision upon seat allocation can be decided by Pakatan presidential council.

“The negotiation on seat allocation took us months to go through. Right now we are still unsure about Muda’s status, so we will just wait and see.

“We will just go with our negotiation and follow the plan. Muda is still out of the picture unless the party gives us any instructions, we will close the chapter (referring to seat negotiations) and move on,” he added.

Tan had on Tuesday (Oct 4) announced that Perak PKR will be contesting more state assembly and parliamentary seats in the upcoming elections.

It was reported on Oct 2 that DAP secretary-general Anthony Loke said the party will be contesting in more Malay-majority areas.

“Everyone can express their interest to contest in whichever seats since we are still negotiating.

“As for Amanah, we are going to contest between 19 and 20 assembly state seats, which is more than what we had during the 14th General Election (GE14),” he said.

“Each party can express their wishes, but I will leave it to our presidential council since they are the ones with a final say.

Perak has 24 parliament seats and 59 state seats. In GE14, Barisan Nasional (Barisan) won 11 seats while the remaining 13 were won by Pakatan. 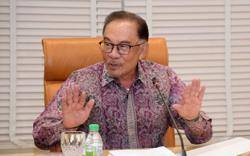