In a statement on Tuesday (Oct 4), the ministry said the article was inaccurate, misleading and gave a negative perception of the overall quality of roads in Malaysia.

It also said the article used a report published by Zutobi, an online driver's education company as a reference, which calculated the scores based on only four factors – road quality; improvements in road quality; road deaths and the relative size of the road network, and it only took into account data for 59 countries.

"The study also cited authentic sources from an executive study involving 14,000 business leaders from 144 countries who participated in the World Economic Forum based in Davos, Switzerland," the statement read.

Based on the news report, Malaysia scored 5.3 points out of the total seven points to be in the 21st position, surpassing Sweden (23), Canada (31), Australia (33) and Britain (37). Malaysia is also ranked second in Southeast Asia, after Singapore.

Meanwhile, the ministry said it pays attention to all published research reports as a check-and-balance method to ensure the delivery of the best services for the people.

"There are various ongoing commitments carried out by the ministry, specifically in maintaining the quality of roads in the country. These maintenance works are focused on Federal Roads, totalling 20,017km.

"The ministry also received over RM900,000 in allocations for road maintenance costs throughout the country. As of August, 6,656 pothole repairs have been conducted," it said.

The ministry said it also focused on continuous efforts to maintain road quality through the Zeropotholes campaign since 2016 and the Kita Jaga Jalan Kita Campaign launched in November 2021. – Bernama 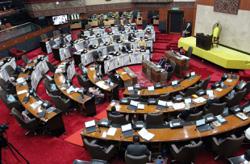