"May all of you continue to excel,” read the post shared on the Istana Negara official Facebook page today.

The choir, consisting of 23 undergraduates, also won Grand Prize Overall Champion voted by an unofficial jury of the competition.

Meanwhile, in a post on the UCC Facebook page, the team shared that they also won the first prize in the Mixed Voice category in Italy. 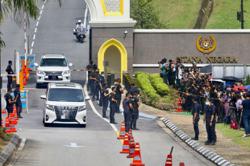