Armed and ready: MAF elite personnel – consisting of the Grup Gerak Khas, Paskal and Paskau – carrying out hostage rescue operations and facing ‘enemy threats’ during a demonstration at the 89th MAF Day Parade at Kuantan Air Base in Kuantan.

KUANTAN: It’s “war” at the air base here, with thousands coming to watch the country’s armed forces personnel in action, including the Malaysia Armed Forces’ (MAF) prowess in carrying out hostage rescue operations and facing “enemy threats”.

The combat parade and aerial demonstration were opened to the public for the first time since the Covid-19 pandemic. The last time the MAF Day carnival was held was in 2019 at the Royal Malaysian Navy base in Lumut, Perak.

The event also saw the launching of the National Military Strategy (SKN) 2.0 document for the MAF has been launched by Chief of Defence Forces Gen Tan Sri Affendi Buang. A fireball is seen during the MAF demonstration. — Bernama

The document includes the latest and most practical strategy for the MAF.

“The publication of SKN 2.0 is to support the country’s defence aspirations by making the Defence White Paper and the National Defence Policy the main sources of reference.

“This document explains the strategic planning of the military to achieve military objectives and enables these forces to gain a strategic advantage in whatever situation they find themselves.

“This advantage will not only allow MAF to apply a broad range of military options but will also serve as the foundation for national defence development towards becoming a future force capable of dealing with increasingly complex and dynamic threats,” he said during his speech at the 89th MAF Day Parade.

Meanwhile, Affendi urged MAF personnel to always be prepared to deal with the uncertainty of the increasingly complex and dynamic regional and global geostrategic and geopolitical security landscape, which allows various new threats to emerge, reported Bernama.

He further called on the entire leadership of MAF to continue to persevere in facing the existing constraints, such as old assets, and assured them that he was working hard to improve service quality.

On the welfare of personnel, Affendi said the MAF leadership and the Defence Ministry would continue to ensure that this aspect is given special attention so that the morale of the personnel and their families remains at the highest level.

At the ceremony, a total of 48 MAF personnel received the Pingat Kedaulatan Negara. 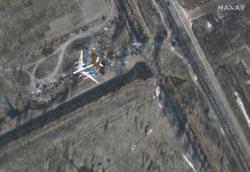