By MARTIN CARVALHO and N. TRISHA

The Umno secretary-general's debunking of the claim was made in response to a statement, purportedly issued by him, which went viral over the weekend.

"In this world, there are nasty and unwise groups of people whose work is solely to spread lies," he said on Twitter late Saturday (Sept 24) night.

“It’s easy to find out whether or not the statement was from me.

He also uploaded images of the statement, which started making the rounds on Friday (Sept 23) after Ahmad Zahid was freed of 40 graft charges over the foreign visa system (VLN) when the Shah Alam High Court found that the prosecution had failed to establish a prima facie case.

The statement claimed that Umno’s supreme council would meet on Sept 30 to discuss a proposal to appoint Ahmad Zahid as Barisan Nasional’s candidate for prime minister in GE15.

Ismail Sabri was appointed the nation's ninth Prime Minister in August last year, replacing Tan Sri Muhyiddin Yassin who relinquished the post after pressure from Umno and other parties.

ALSO READ: If there are calls, I am open to being PM for a third time, says Dr M

Former prime minister Tun Dr Mahathir Mohamad also said on Saturday he is willing to take the country's reins for a third time if there are strong calls for him to do so and no other suitable candidates are available. 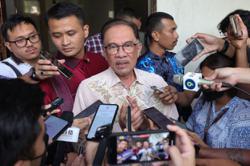