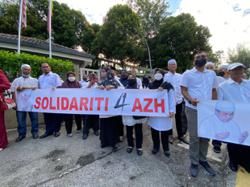 SHAH ALAM: Hundreds of Umno supporters gathered outside the Sultan Salahuddin Shah Abdul Aziz court complex here from as early as 7am, including many who had travelled from Terengganu through the night.

And at about 11.45am, there was a loud cheer as word got out that party president Datuk Seri Dr Ahmad Zahid Hamidi had been acquitted of all 40 charges of graft related to the foreign visa system.

“Alhamdulillah!” and “Allahuakbar!” were heard among the crowd, as the mood quickly turned from anxious to triumphant.

Despite the heat and lack of shelter from the sun, the supporters had stayed for hours outside the court grounds after they were denied entry due to crowd restrictions.

As Ahmad Zahid’s vehicle left the court and approached the complex’s exit, it stopped and the Bagan Datuk MP alighted from his MPV to be greeted to a round of applause from supporters.

Amid the cry of “Allah selamatkan kamu!” (May Allah save you!) a teary-eyed Ahmad Zahid hugged and shook hands with his supporters before joining them in a prayer.

“Some of us came all the way from Terengganu. We travelled after midnight to reach the courts early in the morning and it is all to provide moral support to our beloved president,” said supporter Nuriah Daud.

“With this outcome, we are all happy and relieved.

“The court result justified what we have been saying all this while – that our president is innocent and a victim of slander.”