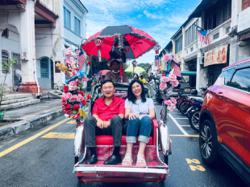 The Penang police chief was referring to exiled VVIP siblings Thaksin and Yingluck Shinawatra who were in Penang for a personal trip.

"We do not need any unforeseen circumstances happening here.

"If a person of that importance visits Penang, we have to provide a police escort.

"We have to provide it as we cannot risk the chances of there being people with ill intentions who might take advantage of their visit here," he said during a press conference held at the George Town police district headquarters in Jalan Patani on Friday (Sept 23).

Comm Mohd Shuhaily was responding to questions about the siblings being given police escorts during their trip here.

"We are aware of the case of Australian Annapuranee Jenkins who was a commoner and was kidnapped and later killed.

"In this case, it wasn't even one former prime minister, there were two of them.

"Just imagine if anything untoward had happened to them.

"The scale of attention that would be given to Penang.

He then confirmed that they were here on a personal visit.

The duo were escorted by police outriders and bodyguards during their travels in Penang.

The ex-Thai prime ministers were spotted at the Cecil Street market during peak lunch hour ordering koay teow th’ng and Chinese pasembur at about 1pm on Wednesday (Sept 21).

Earlier, they were seen at a food court in Weld Quay.

There was no official confirmation on what their schedule was, with a source saying that it was a private holiday.